Family’s plea for CPR training in every school 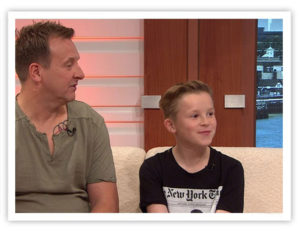 The family of schoolboy who fell unconscious during a swimming lesson and was brought back to life after his heart stopped beating for 25 minutes is calling for a defibrillator and CPR training in every school.

Cade Ewington, 11, was rescued by quick-thinking swimming teachers when they saw him fall unconscious and lying face down in the water.

A confident swimmer, he became unresponsive during his first school lesson at Active Luton’s Lewsey Pool on June 6. He suffered a cardiac arrest but paramedics were on the scene within five minutes to perform life-saving CPR.

However, they struggled to restart his heart and Cade hadn’t taken a breath for 25 minutes – meaning he was medically dead. The schoolboy, from Luton, was later diagnosed and treated for a rare heart rhythm condition which triggered the cardiac arrest.

Last year GMB ‘s Heels for Hearts campaign in conjunction with the British Heart Foundation raised almost half a million pounds, which has paid for 432 CPR kits and over 15, 000 mannequins to be put into secondary schools and sixth forms across the UK.